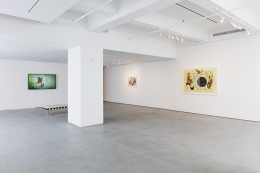 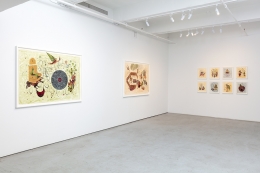 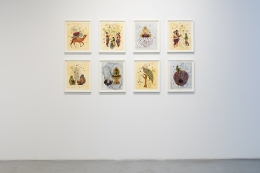 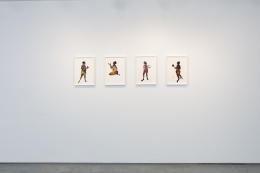 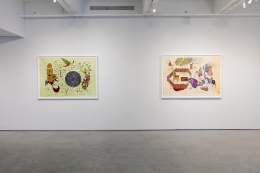 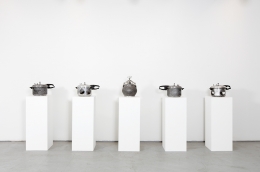 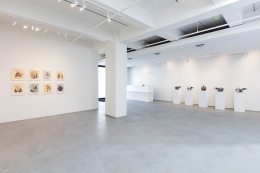 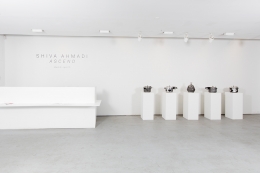 (NEW YORK) February 2017—FOR IMMEDIATE RELEASE—Leila Heller Gallery is proud to present Ascend, an exhibition of new works by Iranian-American artist Shiva Ahmadi, whose ethereal, evocative use of the aesthetic modality of traditional Persian painting ensnares the viewer in complicit landscapes of violence, producing a potent and poetic critique of contemporary politics both foreign and domestic.  Attractive and repulsive, terrible and yet enrobed in playful delight: each of Ahmadi’s complex and indeterminate paintings and objects, replete with violence both real and imagined, daringly address subjects of terrorism, refugees, global capitalism, and corruption—all through symbolic depictions of sublime perpetrators and the most ordinary, innocent, helpless, victim(s).

September 2, 2015: the body of a small boy, later identified as Aylan Kurdi, washed ashore on the pristine banks of the Mediterranean Sea, drowned.  The three-year-old and his family were refugees, fleeing the escalating humanitarian crisis in Syria. It is a death that spoke to the artist, not sentimentally but symbolically: the sign of a closure of the promise of the European-cum-American experiment of universal rights or justice.  Ahmadi funneled her outrage into the production of this new body of work: playing upon an alliteration of the boy’s name in ancient Arabic, meaning ‘high one’, or ‘to ascend'.

Blood, bombs, and the ties that bind in violence, appear once and again in the artist’s oeuvre, manifesting a visual language of seductive indeterminacy, whose ambivalence points both towards the horror of violence and oppression while also presenting the suggestion, however macabre, of a reversal of power—or at very least signification—for better or worse.  “Ahmadi’s painterly language,” comments scholar Talinn Grigor in an essay on the artist’s work, “transforms monkeys into despots, thrones into bigoted states, bubbles into bombs, paint into blood, and hospitality into global violence.”

Reversal, contrast, and the inhuman, widening gulf of inequality are all essential to the complexity of juxtapositions, which mark Ahmadi’s delicate and indomitable body of work.  In The Knot, a vast 40” by 60” watercolor and ink on paper, figures float on an aqueous green background.  On the left-hand side, a figure sits upon a golden throne—itself a visual trope in Ahmadi’s work—invoking both a tradition of Iranian hospitality and a symbol of autocratic rule. On the far right of the image, attendants hold ambiguous, round objects in tribute (which could be either bombs or balloons), their faceless visages pointed up towards a third grouping: a winged character in an uncertain narrative, holding up the ascending figure of a little boy.  Ahmadi further explores this narrative through the medium of video, in Ascend, a short animation with sound.

In further large scale paintings for this exhibition, such as The Mesh (2016) and The Wall (2016), an immuring structure, present in Ahmadi’s previous works, reappears, as a gesture towards the Kaaba, the first mosque inside of the Holy structure in Mecca. In the latter work, this enclosure, like fortress Europe—containing a latticework of piping connoting the corrupting influence of oil, nuclear power, or invisible virtual network of information—looms impenetrable over a helpless collective couched in a mere of blood, unable to storm the castle walls.  In the former case, the symbol of the golden throne materializes once more, this time empty—yet before it streams an evocative pool of red paint. The implication is clear: the sacred is also a source of violence and death for the artist, endlessly confronting her identity as a postcolonial subject in a present imbued with pervasive neo-imperialism and persistent terrorism.

If Grigor continues that Ahmadi’s labored, detailed forms in fluid watercolor indicate that the artist’s process-based answer to the “instability of the global was to prescribe a desire to control the local”, then the final and most provocative works in this exhibition are a series of objects composed from commercial pressure cookers, indicative of homemade tools of terrorism.  On their acid-etched surface these tactile, weaponized objects, ghosts of their former live as domestic paraphernalia, reveal verses from the Quran recited by the faithful as they pass from this world.  Here, ascension and death fully align, gesturing darkly, even dangerously towards events all too local to the New York and Chelsea site in which this exhibition takes place.   Beautiful and violent, these all too uncanny objects question whether ascension may be possible, or even preferable, at all, when the promise of paradise is its own weapon of war.

Shiva Ahmadi was born in Tehran, Iran in 1975 and currently lives and works in Northern California, where she is Assistant Professor of Art at UC Davis. She received her B.F.A. from Azad University, Tehran, in 1998, and her M.F.A. in Painting and Drawing from Cranbrook Academy of Arts and Wayne State University, respectively.  In 2016 she was the recipient of the Pollock Krasner Foundation Grant, and Anonymous Was A Women Award. Recent exhibitions include: Home Land Security, organized by the For-Site Foundation, San Francisco, CA; Global/Local 1960-2015: Six Artists from Iran, at the Grey Art Gallery, NYU, NY; and Firelies in the Night Take Wing, at the Stavros Niarchos Foundation in Athens, Greece. In 2014 the Asia Society Museum in New York commissioned her to create a new work as part of their ongoing In Focus series, where it was then exhibited in the Summer 2014.  Ahmadi’s work is in the permanent collections of numerous museums, including: the Metropolitan Museum of Art, New York, NY; The Asia Society Museum, New York, NY; Museum of Contemporary Art (MOCA), Los Angeles, CA; the Detroit Institute of Arts, Detroit, MI; the DePaul Art Museum, Chicago, IL; the Herbert F. Johnson Museum of Art at Cornell University, Ithaca, NY; and the Farjam Collection, Dubai, UAE.

Skira is publishing the first book-length study on her work, available in Fall 2017, with essays by Talinn Grigor and Michelle Yun. 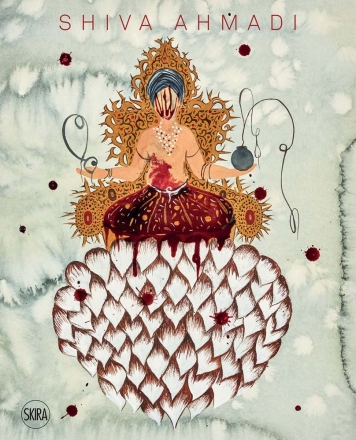 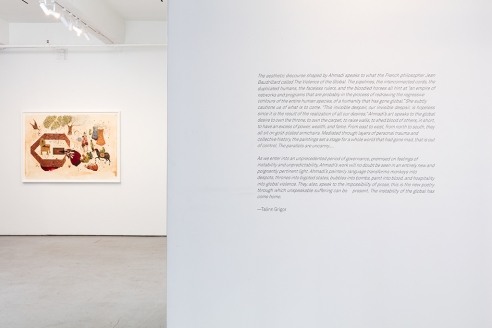