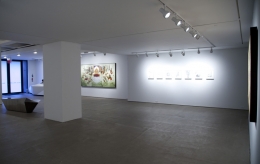 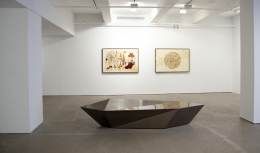 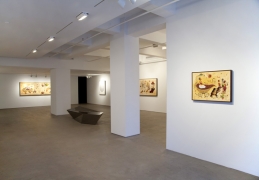 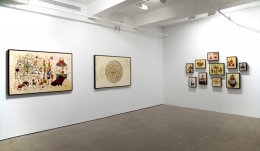 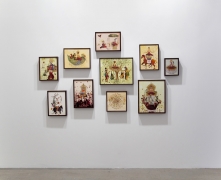 New York, New York (February 4, 2013) Shiva Ahmadi’s third solo exhibition will be on view at Leila Heller Gallery in Chelsea at 568 West 25th Street from February 21 – March 23, 2013.  Apocalyptic Playland will feature new paintings, works on paper, and will also include the artist’s fist foray into video work. A catalogue with an essay by Heather Ecker, Head of Curatorial Affairs of the Aga Khan Museum, will accompany the exhibition.

Although on the surface Ahmadi’s works appear vibrant, playful, and even mythical, they nevertheless deal very much with the harsher sides of reality. Through thick layers of generously spread opaque reds and purples, Ahmadi’s delicate final touches consist of ornate floral patterns painstakingly applied with metallic gold ink. By creating such a lush world that is at once beautiful and captivating, yet ultimately destabilizing and unsettling, the artist explores the sugar-coating and detachment that comes from corruption.

Ahmadi depicts elephants and camels that float on candy-like clutter, yet when the viewer looks closer, one realizes that the clutters of candy are also cluster bombs, bullets and other projectiles.  The elements that once seemed so beautiful and playful soon suggest a much darker reality.

Playfully selective with her referencing of miniature painting, Ahmadi has created an allegorical realm where faceless tyrants and religious authorities sit on ornate gilded thrones while subservient minions bow to them. Some of the tyrants are the guardians of nuclear reactors, which float on clouds. The minions are often festive buffoons, monkeys and dogs: They kiss feet; they juggle grenades and might even be restrained by leashes.

Ecker writes in the exhibition catalog: “For Ahmadi, corruption is an integral cancer linking East and West, fed through the arteries with petrol, and stoked with the apparatuses of nuclear power, war and the increasingly uneasy pressures applied to societies that are forced to sustain it. The expressions of corruption in these works seem familiar: here, the bloody, enthroned ruler holds a grenade, and there, the witless, dependent servant takes orders and creates webs of intrigue and mayhem.”

Ecker continues: “Colors, figures and perspectives drawn from traditional Persian painting provide Ahmadi’s archetypical repertoire. But, hers is not a jaded critique of Iran. Her elegant calculations seem to predict the same painful result everywhere, despite a different décor.”

Born In Tehran in 1975, Shiva Ahmadi lives and works in Detroit Michigan, She receiver her BFA from Azad University, Tehran, in 1998; MA and MFA degrees from Wayne State University in 2000 and 2003, respectively; and her MFA from Cranbrook Academy of Art in 2005. She has exhibited at several institutions including College of Wooster Art Museum, Wooster; Chelsea Art Museum, New York City; and the Institute for Women and Art- Rutgers University, Newark. Ahmadi’s work is also a part of several public and private collections including the Museum of Contemporary Art (MOCA), Los Angeles; DePaul University Art Museum, Chicago; and the Detroit Institute of the Arts, Detroit. 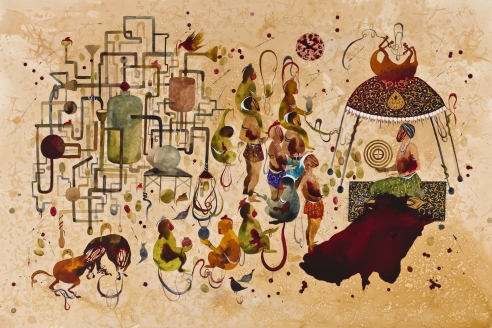 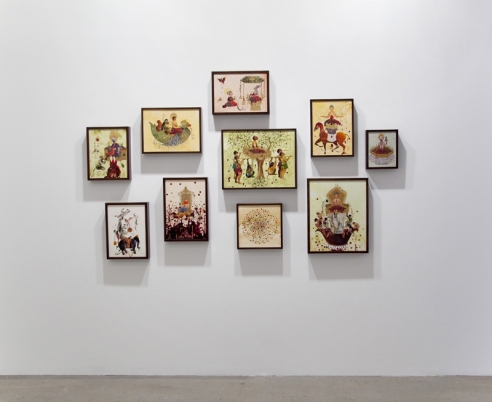